In addition to moving 460 miles, starting the international adoption process, and beginning to write a novel, I have…

Are all of those accomplishments equal? Well, no. I also managed to vacuum up at least 5.6 billion dust particles yesterday, but you don’t hear me bragging about that. OK, apparently you do.

To put it into perspective, I read 46 books in 2018 and at least two of those were small graphic novels (but they still count!). And here we are, halfway through November, and I’m already ahead! If I really wanted to #HumbleBrag, I’d include the number of children’s books I read this year, but who has time to record those hundreds of titles? Then again, at least half of them would be by Mo Willems.

While I buy Christmas presents year-round, I’m sure most of you are sane and keep Christmas-gift-buying contained the actual holiday season. But unless you love stress, I imagine you’ve put at least a hint of thought into your gift recipients. Therefore, I thought I’d give a little boost and offer some of my favorite book recommendations from 2019.
Adult Non-Fiction
If you’ve been around for awhile, you’ll know that I typically complain about (i.e. never finish) non-fiction books. However, I took a little turn this year–call it maturity?–and discovered a few I couldn’t put down.

Educated by Tara Westover
Warning: This one is tough. An autobiography about an ultra-conservative, secluded Mormon family living in Idaho. There’s some ugliness, but a very, very well-written story.

Lab Girl by Hope Jahren
If you love science, plants, quirky people, or research, I’d say you should give this one I shot. I don’t particularly love any of those things (except quirky people), but I do love a scientist.

Little Victories: Perfect Rules for Imperfect Living by Jason Gay
I listened to this on audiobook, and it was the perfect little story to turn on and off throughout the week. Jason is a sports columnist at The Wall Street Journal, but he’s written a funny book that’s accessible by people who, frankly, don’t care about pigskins or fastballs.
Adult Fiction

Daisy Jones & The Six by Taylor Jenkins Reid
While this one felt like a biography/interview, it was a very well-written novel. I already gave my rave reviews here, and I included a round of dubious questions for those alive in the 1970s.

Crazy Rich Asians by Kevin Kwan
Every time I see this book, I debate if there should be a comma between “crazy” and “rich,” and I agree with Mr. Kwan’s decision to omit one. These people are both crazy-rich and crazy and rich. Such a cute idea. The third in the trilogy wasn’t quite as fantastic, but the first one was a hilarious romp.

The Martian by Andy Weir
I loved this one. Yes, it has a bit of a potty mouth (OK, quite the potty mouth, ahem, so don’t listen to it while the kids are within earshot). Even with its pile of math, the humor was Spot. On. Astronaut/mechanical engineer/botanist Mark Watney is stranded on Mars and has to “science the sh*t” out of…absolutely everything…to survive. It’s surprisingly laugh-out-loud funny. Promise!

The Only Thing Worse Than Me Is You by Lily Anderson
OK, this one was published in 2016, and you’ve heard me rave about it before. I reread it this year and adored it the second time through, even rereading certain sections. Shakespeare’s Much Ado About Nothing is my jam, and I love this modern, YA recreation. Nerd heaven.

Six of Crows by Leigh Bardugo
This gritty gang in a very dark world has stuck with me longer than most. With a touch of magic, a unique bunch of frenemies faces impossible challenges to score revenge and redemption. Warning: The sequel is out, but we’re still waiting for the completed trilogy.

Traitor’s Masque by Kenley Davidson
I found the Andari Chronicles through Kindle Unlimited, and, at the time, they were offered for free. So, whoo! They’re clean, interesting retellings of fairy tales. Traitor’s Masque retells Cinderella. I got through the first two books, but then got distracted in #3. It was retelling The Twelve Dancing Princesses, and I just didn’t care anymore. I was hoping to get to #4, Shadow and Thorn, because I love a good Beauty and the Beast reimagining. If fairy tale retellings are your jam, check them out. They’re sweet and enjoyable.

There Are No Bears in This Bakery by Julia Sarcone-Roach
From the author who imagined up The Bear Ate Your Sandwich, I love the perspective of the deceitful little narrators.

Dandy by Ame Dyckman
This is the book that made me an Ame Dyckman fan. A daddy sacrifices for his daughter…with the eventual help of his dad friends. Also, the entire book is a pun of “dandelion,” which is just fantastic. (My botanist husband just informed me that “dandelion” means “teeth of the lion” in rough French. Fun plant fact!)

You Don’t Want a Unicorn! by Ame Dyckman
I had to physically restrain myself from adding a third Ame Dyckman book to this list (Misunderstood Shark: Friends Don’t Eat Friends), so you’re welcome. In case you’ve been living under a rock, unicorns continue to be hot in the picture-book world. But this one reveals the consequences of wishing for a unicorn.

Old MacDonald Had a Truck by Steve Goetz
If you know a kiddo who loves trucks, I recommend this imaginative little rhymer.

P is for Pterodactyl: The Worst Alphabet Book Ever by Raj Haldar
The most unique (and possibly annoying…but in a brilliant way?) alphabet book out there. I mean, isn’t “C is for Czar” just cruel for the learning-to-read world?

Hello Hello by Brendan Wenzel
This beautiful book sparked my son’s love of animals. Each animal is connected to the next by some characteristic. The animals are interesting and unexpected.

I Can Only Draw Worms by Will Mabbitt
Y’all. It’s exactly how it sounds. This book teaches kids to count to 10 (well, it also includes 8 and 8-and-a-half, as one worm has a tragic accident). It’s simply hilarious. 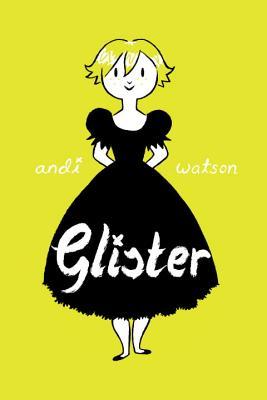 Glister by Andi Watson
I’m not much of a graphic novel reader, so sorry this section is slim. I discovered Glister in the juvenile section but found plenty to enjoy. Here’s a copy-and-paste of the back cover copy: Strange things happen around Glister Butterworth. A young girl living on her family’s English estate, Glister has unusual adventures every day, from the arrival of a teapot haunted by a demanding ghost, a crop of new relatives blooming on the family tree, a stubborn house that walks off its land in a huff, and a trip to Faerieland to find her missing mother.

Currently Reading
Supernova by Marissa Meyer – So, I love me some Marissa Meyer YA novels. I loved the Lunar Chronicles, and Heartless will always have a special place in my heart. Her newest series, Renegades, is…OK? I think I’m enjoying it, but it feels surprisingly familiar, like something I’ve read before. The three books are quite long, though, so I can tell she put a ton of work into them. They just don’t pop quite as much as the Lunar Chronicles did for me, even when I reread that series for a second time.